Talking to the Starry Sky

The Great East Japan Earthquake occurred on March 11, 2011. Though this unprecedented disaster caused more than 18,000 people to be declared dead or missing, it is not well known that the mortality rate of people with disabilities was twice that of people without them.

The film depicts this little-known fact through a fictional narrative based on the true stories of witnesses whose accounts were collected in the areas hit. 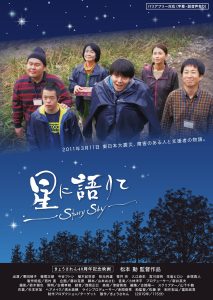