The Shoshone people have lived on the eastern slope of the Wind River mountains for more than 10,000 years—this water runs deep for them. They pray alongside the river. They pray for the river. They pray with the river. But what happens when your river is highjacked by a ruthless system that would stop at nothing to control the resource?

Directed by Jon Klaczkiewicz, TRIBAL WATERS, a film by Teton Gravity Research presented by Patagonia, documents the course and history of the magnificent Wind River, now the home waters of the Eastern Shoshone and Northern Arapaho Tribes. The story of the Wind is a record of stolen ancestral lands, insatiable agricultural demands and a mercurial, unreliable American justice system. Through the eyes of Darren Calhoun, an enrolled member of the Northern Arapaho Tribe and a descendent of the Eastern Shoshone Tribe, we experience a river that impacts everything it touches—from the price of next season’s crops to a native culture, history and way of life. 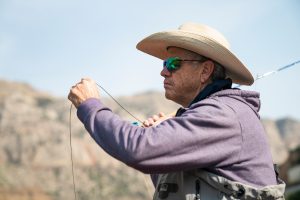