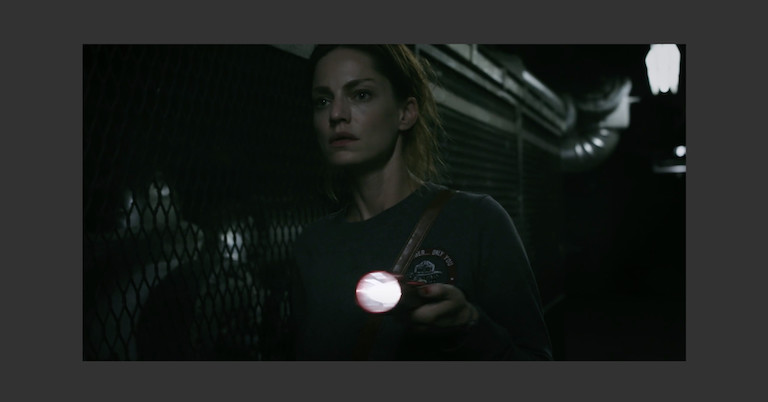 HIDDEN CITY is a psychological mystery featuring Annabeth Gish that’s set in our age of political anxiety and culminates at a real-life democracy march. Mary Portman, a travel writer who explores lesser-known features of US cities, stumbles upon a voting-related crime in progress. In an effort to expose the scandal, she joins with a prominent journalist before realizing that her quest for truth has been a hall of mirrors.

A NOTE FROM THE DIRECTOR

I was inspired to create HIDDEN CITY two years ago after learning that hundreds of pro-democracy rallies were being staged simultaneously across the United States. I couldn’t stop thinking how utterly strange and scary it was that such a movement was needed in this country. I’ve always been drawn to movies and books about how political anxiety affects a person’s daily life and psychological state – works like THE UNBEARABLE LIGHTNESS OF BEING, CABARET, THE OFFICIAL STORY, THE LIVES OF OTHERS, and CHRONICLE OF A SUMMER.

As a very young woman visiting Estonia in the early 1990s, not long after it had gained independence, I was struck by an image painted directly onto a street-facing windowpane protected by iron bars. It was a jewel-toned portrait of a woman whose sad, frightened gaze met my own, as if asking for help. One of the bars crossed over her closed mouth. She seemed to be saying, “I am trapped and silenced, but I am alive with color.” I took a picture and have displayed it in numerous homes ever since. I wanted to preserve her, frozen in time; there was something I needed to remember.

For me the painting has always represented repression – in all of its forms – but I never related to the woman’s precise emotional state as someone who lacked mental freedom due to the dehumanizing, oppressive, corrupt government she happened to live under. On Election Day 2016, I began to understand. Perhaps like many Americans, I had always taken for granted that – as the original democracy – our country guaranteed basic rights that would remain constant. That regardless of the party affiliation of our elected leaders, our democratic core would not waver. Justice might not always prevail, but laws and judicial decisions would be honored by our leaders. Elections officials might be fiercely partisan, but most would oversee fair and free elections. The President of the United States would consider it their duty to uphold the basic tenants of our constitution: separation of powers, human rights, refusal to entertain foreign influence. Perhaps most important of all, there was such a thing as objective truth. Until that day and those that followed, it was unfathomable that the Constitution might be disregarded such that citizens feared for their basic liberties and wondered if the judicial system would survive.

Those kinds of nightmares happened in other countries, not ours. We taught those countries, like Estonia, how to fortify their new democracies. One morning I woke up very early and started writing a script. I didn’t know how it would start, but I knew it would end in the middle of the democracy rally in Los Angeles. I needed to capture the feeling I had every day – a mixture of disbelief and fear – and link it to the political environment. I began taking pictures and videos of places where politics intruded on daily experience. A “Resist” sign on a freeway overpass. A threat of nuclear war terrifyingly uttered on the television playing in the veterinarian’s waiting room. I wanted to capture history as it happened. I recognized this period as one that forever would be examined as one of the most incredible in global political history. I needed to preserve the immediacy of that, and set out to paint a psychological portrait of one woman whose life becomes inescapably tethered to the government her fellow citizens helped elect. With the script and film, I tried to make visual the daily reality of feeling both suffocated and animated by the political atmosphere and the inability to escape its consequences.

The story culminates at the rally, where Mary, the protagonist, reaches a certain level of awareness, if not resolution. It was a difficult but exhilarating challenge to capture a specific emotional state without the benefit of hindsight, but I felt it was important to try. The sense of urgency and real fear –as opposed to remembered fear – was one I felt driven to preserve.

ALSO AVAILABLE ON THE APP