The remains of thousands of undocumented immigrants lie undiscovered in the remote and inhospitable landscape of Brooks County, TX. The bodies that have been found were often buried in poorly marked graves, many interred in trash bags and other makeshift containers, a consequence of one of the poorest counties in the United States being overwhelmed by a migrant death crisis that has been unfolding for decades. Heartbreak Country explores attempts by the non-profit organization Operation Identification and the South Texas Human Rights Center to locate, exhume, and identify the dead from this heartbreaking humanitarian crisis. The film also explores the search and recovery efforts of the Texas State Guard and the controversial apprehension efforts of the Border Patrol Tactical Unit. Through interviews and observational footage, the film adds another important facet to the ongoing discussion about migrant issues and immigration reform in the United States. 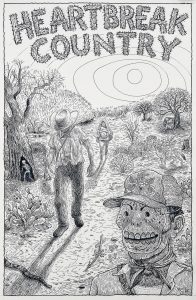