Narrated by Jodie Foster, Be Natural: The Untold Story of Alice Guy-Blaché is a documentary about the first female filmmaker, Alice Guy-Blaché, which explores the heights of fame and financial success she achieved before she was shut out from the very industry she helped create. Guy-Blaché started her career as a secretary to Léon Gaumont and, at 23, was inspired to make her own film called La Fée aux Choux (The Cabbage Fairy), one of the first narrative films ever made. After her filmmaking career at Gaumont (1896-1907), she had a second decade-long career in the U.S., where she built and ran her own studio in Fort Lee, N.J.

Over the span of her career, she wrote, produced or directed 1,000 films, including 150 with synchronized sound during the ‘silent’ era. Her work includes comedies, westerns, and dramas, as well as films with groundbreaking subject matter such as child abuse, immigration, Planned Parenthood, and female empowerment. She also etched a place in history by making the earliest known surviving narrative film with an all-black cast.

Green has dedicated more than eight years of research in order to discover the real story of Alice Guy-Blaché (1873-1968) – not only highlighting her pioneering contributions to the birth of cinema but also her acclaim as a creative force and entrepreneur in the earliest years of movie-making. Green interviewed Patty Jenkins, Diablo Cody, Ben Kingsley, Geena Davis, Ava DuVernay, Michel Hazanavicius, and Julie Delpy – to name a few–who comment on Guy-Blache’s innovations. Green discovered rare footage of televised interviews and long archived audio interviews which can be heard for the first time in Be Natural, which affords Alice Guy-Blaché to tell her own story. 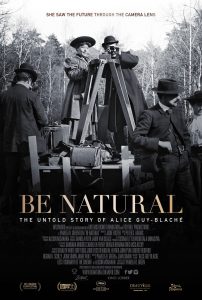